Forum rules
Please can you post items for sale or wanted in the correct For Sale section. Items / bikes for sale here will be removed without warning. Reasons for this are in the FAQ. Thanks
Post Reply
4 posts • Page 1 of 1

Could anyone advise me on how we can recognise the Front and Rear geartrain or gearcase? These drive the camshaft from the centre of the crankshaft and the ones for the front and rear have different part numbers on CMSNL.com and a noticeable difference in the lead/lag of the secondary sprocket that is driven by the crankshaft. According to the NC21 manual (page 9-18) the text to the left of the middle photo says "ギヤケースほはFまたはRの識別マークがあり、Fはフロントシリンダ、Rはリヤシリンダに取付けること" which Google Translates as "The gear case has an identification mark of F or R, F is for the front cylinder and R is for the rear cylinder."

I would appreciate any insights on how to recognise the front and rear geartrains.

Background: I've got several NC24 engines, including one in my bike. On my bike, I've noticed the timing mark on the RH of the crankshaft does not seem to align exactly with those on the RH end of the camshafts. They appear to be a few degrees out, and whatever I've tried in terms of removing the cam and refitting it 1 tooth either way I've not seem them line up exactly. I also borrowed a camshaft from one of the spare engines to try that. I am checking the timings with everything correctly torqued down (to minimise the chances of play, etc. being a cause of the mismatch in alignment). I have also checked I've the correct camshafts fitted in the front and rear heads, etc.

When I align the markings on the RH of the camshafts to the line in their housing (at the top and parallel with the sparkplug hole) then the line between the respective T1, T2, T3, T4 is a few millimetres either before or after the V pointer at roughly 11 o'clock inside the timing inspection hole in the clutch-side casing. (For better visuals see viewtopic.php?t=1943 )

I wondered whether the bike had the geartrain for the F and R swapped over, or whether I'm confused, or whether I'm misunderstanding the instructions on this forum and/or in the NC21 manual...

my experience has been with NC30 - they are marked F and R?

Also, there is one of them that has a mounting bolt in the head/upper crankcase - that may be the only difference?
IMPERATOR REX ANGLORUM

sorry this reply is a bit late... they should be marked.

maybe it is hard to find place.. 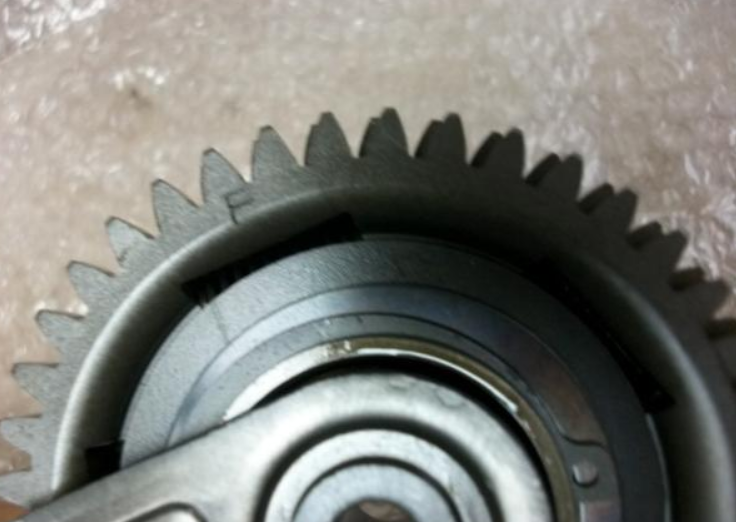 xivlia wrote:i dont go fast on this bike so really do not need a rear brake.. /

vic-vtrvfr wrote:Ask xivlia for help, he's tackled just about every problem u could think of...

Thank you for the photo and suggestion. For whatever reason my smaller gears have BOTH F and R on them, they're about 160 degrees apart, so not quite opposite each other. Here's a link to photos on Google Photos, if there's a way I can add the photos here I'd be happy to do for posterity.
https://photos.app.goo.gl/h6fCcacJd9QHZr1HA
Top
Post Reply
4 posts • Page 1 of 1